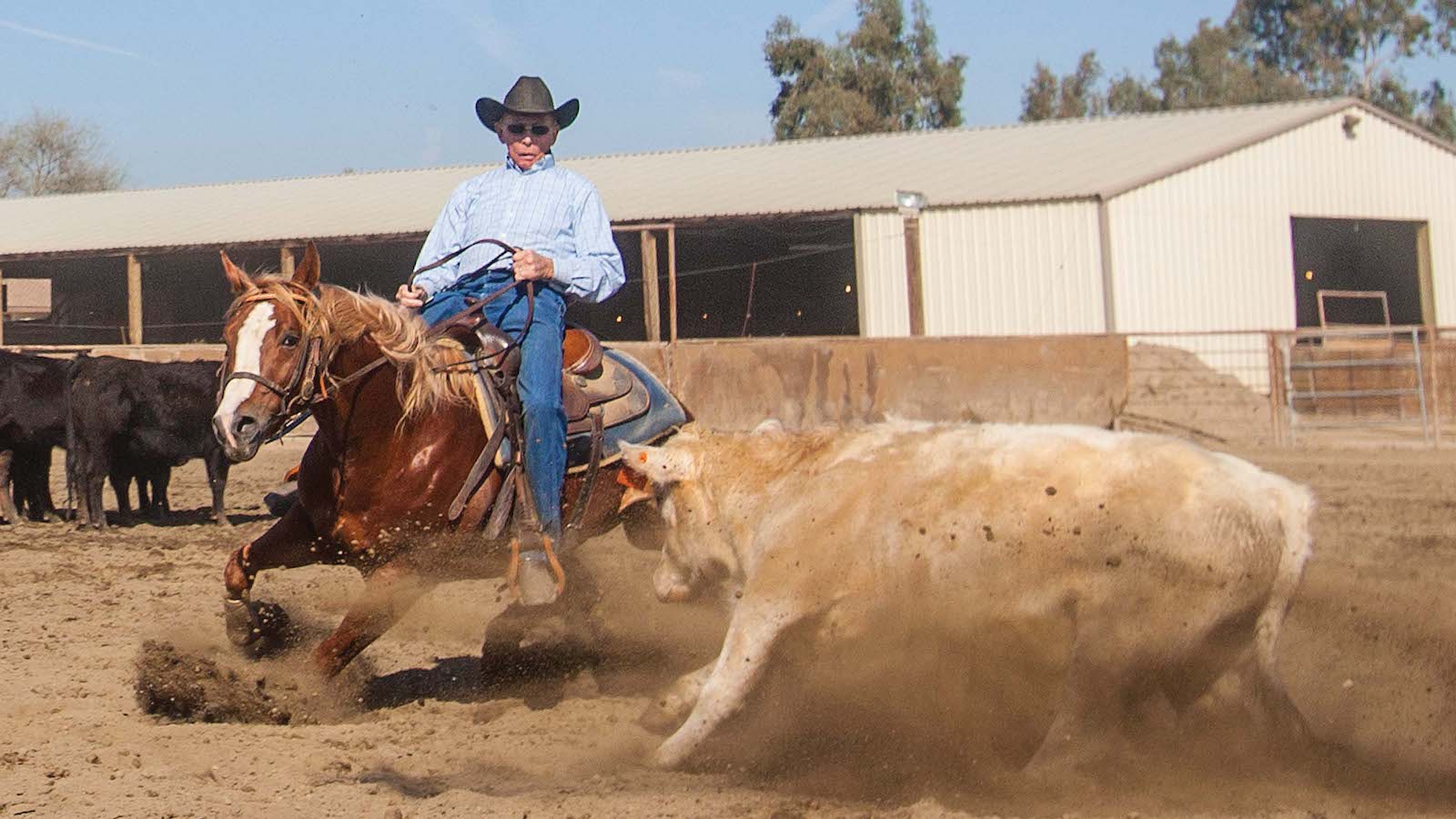 Doug Williamson hasn’t let age, injuries or a vicious bout with cancer get in his way. He continues to train and show reined cow horses at the highest level.

Doug Williamson steps on his sixth horse of the day as the mid-morning sun bears down on his arena south of Bakersfield, California.

He rides a 3-year-old black mare into a herd of yearling calves and cuts out a red bald-faced heifer. Thee mare’s eyes grow wide as she works, staying low in the dirt and darting left and right to stay in front of the heifer. Doug sticks in the middle of the saddle, using subtle cues to find the delicate balance between guiding the mare and letting her figure things out on her own.

After several impressive moves, Doug pulls her off the cow, smiles and pats her on the neck.

“Pretty nice for a fat little mare,” he says.

It’s clear the young mare by Moms Silverado Cat has already won her trainer’s admiration. The National Reined Cow Horse Association’s Snaffle Bit Futurity is still months away, but Doug has high hopes for how she will perform at the event in Reno, Nevada, September 18–October 1. He plans to show four 3-year-olds at the prestigious event.

“I have four that are really good horses, so I think we’re in good shape,” he says. “I think the black mare may be the best one right now. I can ride her one-handed in the cutting, and she won’t let a cow get away. She’s doing the reining way better than before. And she’s black. I’ve never been able to win the Futurity on nothing but a black.”

Indeed, Doug has won the Snaffle Bit Futurity twice, both times on black horses. In 1992 he claimed the championship on Mr San Olen, and in 2002 he won it on Doc At Night, a son of his first winner. He has captured many other prestigious NRCHA titles, including the Hackamore Classic Championship, and Open Hackamore and Open Bridle World Championships. In addition, he won the National Stock Horse Association’s World’s Richest Stock Horse. All those titles have been earned since 2010.

This past June during the NRCHA Derby, competing in the CD Survivor Memorial Bridle Spectacular on High Brow Shiner, Doug marked a scorching 228 in the fence work to win $18,625 and claim the reserve championship. His lifetime earnings exceed $1.4 million, and at age 74 he still keeps a barn full of horses in training, riding between 12 and 15 horses a day.

“He’s not human,” says cow horse trainer Jake Gorrell, who edged Doug to win this year’s Bridle Spectacular. “I remember watching him at shows when I was a kid, and that was a long time ago. He’s still kicking our butts. And what really amazes me is how he has persevered forever and keeps that positive attitude.”

Doug’s timeline includes a multitude of challenges, from having to take over his family’s large cattle operation at age 14 to surviving severe horse wrecks and beating cancer. Through it all, the NRCHA Hall of Fame rider continues to train top cow horses and remains a favorite to win, whether competing on a 3-year-old in the snaffle, showing in the hackamore or riding a finished bridle horse.

The Gift of Horses